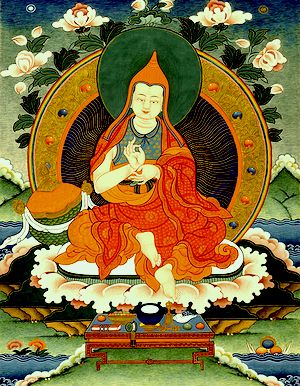 At the age of three Konchok Zangpo’s mother died, and, two years later, his father also passed away. He was cared for by relatives and spent his days herding. At the age of nine he left the grazing lands and went to a monastery called Samling (bsam gling) where a monk named Tonpa Rinchen Tashi (ston pa rin chen bkra shis, d.u.) took him in and taught him to read and write.

At the age of fifteen in 1309 Zangpo Pel went to Bodong Evamling Dharma Center (bo dong e wam gling gi chos drwa chen po) where he studied important texts that included Abhidharmasamuccaya, the five treatises of Maitreya, the Bodhisattvacaryāvatāra, and the six treatises of Madhyamaka, under the tutorship of Lama Kunga Gyeltsen. He was examined on Abhidharma by Jamyang Nyima Gyeltsen (‘jam dbyangs nyi ma rgyal mtshan, d.u.), and from his accomplishments earned the epithet Tokme Zangpo (thogs med bzang po), meaning, non-obstructed and good. (Later in life he earned the further epithet of Gyelse, meaning “son of the Buddha,” or bodhisattva.).

At the age of twenty-one, in 1315, Tokme Zangpo started teaching. He also continued his education, going to Sakya Monastery where he studied epistemology (tshad ma), including the Seven Treatises of Pramāṇa (tshad ma sde bdun) under the tutorship of Lama Zhon-gyel (bla ma gzhon rgyal, d.u.). At the age of twenty-three, in 1317, he participated in public debates in numerous monasteries in Tsang, earning a reputation for his scholarship in Pramāṇa and related topics. Other teachers included Rinchen Sonam Drak (rin chen bsod nams grags, 1273-1345), and Buton Rinchen Drub (bu ston rin chen grub, 1290-1364).

In 1326, when Tokme Zangpo was thirty-two, Jamyang Donyo Gyeltsen (‘jam dbyangs don yod rgyal mtshan d.u.) requested him to ascend the abbot chair of the great Bodong E (bo dong e) Monastery. He served for nine years, from 1326 to 1335 (some sources have it seven years). When he stepped down he enthroned Pang Lotsāwa Lodro Tenpa (dpang lo tsA ba blo gros brtan pa, 1276-1342).

In 1337 he moved to Ngulchu Chodzong (dngul chu chos rdzong) where he sat in retreat for over twenty years. He continued to teach, giving detailed Lamrim and Lojong instructions and related topics to Rendawa Zhonnu Lodro (rje btsun red mda’ ba gzhon nu blo gros, 1349-1412). He also gave him teachings on the Bodhisattvacāryāvatāra. Tokme Zangpo is counted as seventy-third in the Lamrim lineage.

Gyelse Tokme Zangpo is said to have composed some one hundred and fifteen works, some of which were printed in a single volume. Chief among these are: A Commentary on the Seven-point Mind-training (blo sbyong don bdun ma’i khrid yig), the Thirty-seven Practices of The Bodhisattva (rgyal sras lag len so bdun ma), and The Ocean of Good Saying (legs par bshad pa’i rgya mtsho), a commentary on the Bodhisattvacāryāvatāra.

Little is known about the later life of Gyelse Tokme Zangpo; he traveled in U in 1361, at the age of sixty-seven. He passed into nirvana at the age of seventy-five in 1369, the earth-bird year of the sixth sexagenary cycle.